TfL’s Strategic Cycling Analysis identified the top 25 connections where new cycling infrastructure is required to enable more people to cycle. Further work between TfL and the boroughs has identified these six routes as the initial routes to take forward to the design stage. The routes will extend from Tottenham in the north, to Peckham in the south, and from Barking in the east, to Willesden Junction in the west, "helping to create a pan-London network of high-quality cycle routes".

The new routes are, it is claimed, an important further step in making the investment required to achieve the Mayor's aim, set out in the draft Mayor's Transport Strategy, of 80 per cent of journeys being made by foot, bike or public transport by 2041.

TfL and the boroughs will now begin design work on:

Ilford to Barking Riverside (10)
This 8km route would link two bustling outer London town centres and a major growth area with up to 10,800 new homes and a new London Overground connection – while enhancing access to the Elizabeth line and London Overground services

Rotherhithe to Peckham (12)
This 4km route would link Peckham with key and growing destinations such as Canada Water and Surrey Quays, and connect up other cycling routes such as Quietway 1 and the proposed Cycle Superhighway 4

The Mayor is also committed to providing a new river crossing between Rotherhithe and Canary Wharf for pedestrians and cyclists, which ultimately could link the proposed cycle routes between Hackney and Peckham to create a continuous 12km cycle route. An initial review of the recent consultation on the proposed Rotherhithe and Canary Wharf Crossing showed strong support for the project. TfL is still analysing all the responses and will be announcing the full results of the consultation in the coming months.

Sadiq Khan said: "I've committed to invest record amounts in making cycling easier and safer for Londoners, and I'm delighted that work is now beginning on designing the next generation of high-quality cycle routes across the capital.

"Working closely with the boroughs, we’re providing new routes in both inner and outer London, including in areas that haven’t previously seen serious investment in cycling infrastructure." 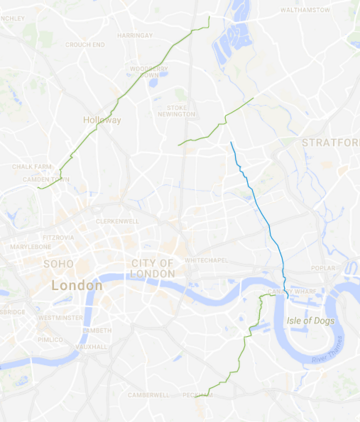